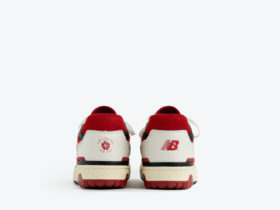 Aimé Léon Doré teams up with New Balance once again

In 1916, Karhu skis were one of the first produced items in a small workshop located in downtown Helsinki where locally sourced birch was transformed into winter forms of transport. Worn by the Finnish army to world champions like Harri Kirvesniemi, who is part of the Karhu family as the official licensee of Karhu ski, cross-country skiing has helped to shape the brand. In celebration of its connection to gliding over the snow, we launch the Cross-Country Ski Pack.The Cross-Country Ski Pack consists of three Fusions 2.0 with a colour palette inspired by the bright pops of colour featured in the cross-country ski designs of the ‘90s and ‘00s.The material selection consists of suede and soft nylon mesh in combination with contrasting coloured leather.The rope lacing adds an outdoor sports feel to the shoes. The Fusion 2.0 remains a salute to the original Fusion model from 1996, when it was the most technical running shoe in the collection.The Karhu team visited the Karhu Ski Factory in Kitee, a small Finnish town in the east of Finland. Both the factory and Kitee’s Sports Centre outdoor facilities, the cross-country ski training location, feature as the backdrop to the photo-shoot of the Cross-Country Ski Pack.The three new Fusion 2.0 colours will release globally on Friday, September 20th 2019 at select retailers, Karhu.com and the Karhu Concept Store in Helsinki.